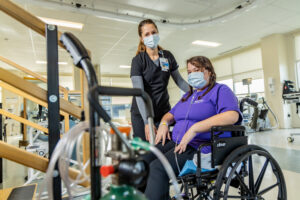 Testing positive for COVID-19 was something Shayna Stanley never thought would happen. The 31-year-old from West Milton was active in independent filmmaking when she began to fall ill.

“I had a fever and it kept fluctuating,” says Shayna. “When I went to the doctor to get tested, I knew it was positive.”

A few days after her birthday in July 2021, Shayna says her symptoms began to worsen.

“I started having trouble breathing,” recalls Shayna. “I only remember being in the ambulance and waking up two months later.”

Shayna was hospitalized at Miami Valley Hospital’s Level I Trauma Center in Dayton. As her symptoms drastically deteriorated in the Intensive Care Unit, Shayna was intubated and placed on a ventilator.

“We’ve seen some severe COVID-19 cases where patients’ conditions rapidly decline and their lungs get worse and worse,” says Vincent Nardy, DO, a cardiothoracic surgeon at Cardiothoracic Surgery Associates and adult ECMO medical director at Miami Valley Hospital. “Shayna’s condition began going down a path where we decided to intervene and put her on ECMO.”

Miami Valley Hospital Foundation purchased the equipment, making the hospital the first in Dayton to offer the adult life-saving therapy.

“ECMO is designed to support the body in hopes that it heals itself,” says Dr. Nardy. “Sometimes there’s nothing we can do to help the lungs heal outside of giving them time. In Shayna’s case, that was ECMO’s main purpose – buying her time.”

“There are dire occasions when we induce patients into a coma to get their body at its lowest possible oxygen demand state,” says Dr. Nardy. “These extreme measures give them the best chance of a positive outcome.”

The odds were stacked against Shayna as she fought for her life against a disease that has killed more than 800,000 Americans since March 2020.

“After a few months of Shayna being hospitalized, the ECMO team had to have a discussion with her mother about withdrawing her from care,” remembers Dr. Nardy. “Literally a day or two after that discussion at the bedside, Shayna’s condition turned, and she started to make a drastic recovery. It was remarkable how well she was improving.”

“It was the craziest thing,” says Shayna. “I remember waking up and it was October. I couldn’t believe I had missed all that time and was in such terrible shape.”

Although Shayna had survived the most life-threatening portion of her illness, months of being bedridden had taken its toll and weakened her body.

Two months after her hospitalization, Shayna is still on oxygen. She has also completed several rounds of physical therapy at the Rehabilitation Institute of Ohio, a joint venture between Premier Health and Encompass Health.

Many people have called Shayna a “miracle” after surviving her grueling battle with COVID-19.

“It is certainly a miracle,” explains Dr. Nardy. “When I was able to finally speak with Shayna, she always has a smile on her face and is willing to do anything she can to improve her health.  Seeing her positive outcome is why we do what we do.”

“I’m very lucky to be here today,” says Shayna. “I never thought this could happen to me, but it did. I have a lot of people to thank for supporting me along the way. I’ve done so much to fight my way back.”