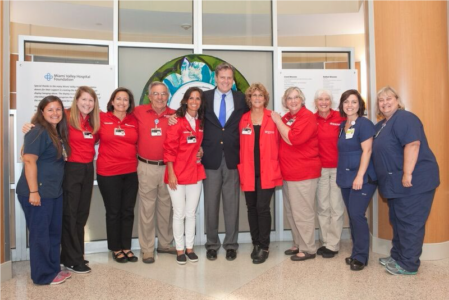 In July, as part of the Foundation-funded Promise to Hope Program, MVH launched a volunteer Infant Cuddler Program to support babies experiencing Neonatal Abstinence Syndrome or other physical withdrawal symptoms. The program’s announcement generated an overwhelming response from people in the community, all wanting to help and support these infants. Information about the program and the community response was heard in Washington D.C., most notably by U.S. Congressman, Mike Turner.

Congressman Turner was first made aware of this aspect of the opioid epidemic in 2013, when he saw firsthand the effects heroin exposure has on newborns. Because of this, and news about the MVH Infant Cuddler Program, he recently visited the Berry Women’s Center to speak with staff and volunteers about their work and training, and to personally thank everyone for their contributions.

“Unfortunately, the babies in Miami Valley Hospital’s cuddler program are suffering with the NAS syndrome due to the use of addictive substances by expecting mothers,” Congressman Turner said. “I am extremely thankful to the volunteers working every day to ease the discomfort of the most vulnerable victims of this epidemic. I will continue to push for legislation in Congress to end this epidemic.”

To donate, or to learn more about Promise to Hope and its vital impact on opiate-addicted moms and their babies, please call the MVH Foundation office at 937-208-2700.